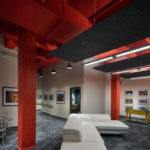 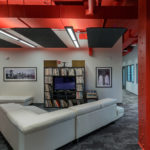 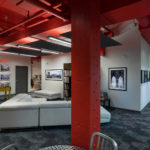 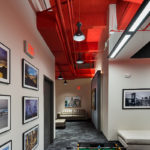 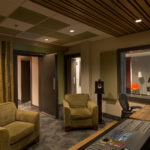 Independent Studios is one of the curated partners within the Nō Studios Building in downtown Milwaukee. They specialize in essential services needed to craft professional, finished products for radio and television commercials/programs, documentaries/films and web/digital commercial uses.

Independent Studios’ expertise relies upon state-of-the-art studio and post-production design, and their custom-built suite includes just that, outfitting both of their audio control rooms and recording studio. The challenge put forward to Abacus was to allow all of these rooms to be connected visually and spatially while being completely isolated acoustically. Further adding to the challenge was the fact that these rooms were located along old exterior walls with windows, all the while being less than 40’ from a major interstate. Abacus and their consultant were not only able to meet the challenge, providing the client with complete acoustical isolation from adjacent rooms and the outside, but were also able to keep the windows to give the rooms natural light and views.

The rest of the build-out included traditional office spaces including a break room and reception area, as well as video-editing suites and a presentation room. Having highly specific rooms for their own individual requirements allowed for Abacus and the client to personalize each room, and the common spaces, with a fun playfulness that matched the culture and attitude of Independent Studios.