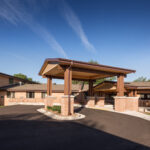 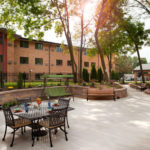 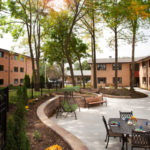 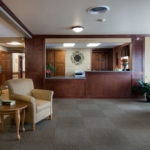 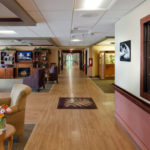 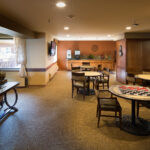 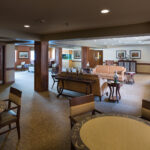 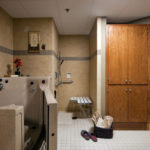 The original Pine Haven facility had been a series of five individual additions occurring over a series of thirty-six years. Each add-on reflected the decade in which building occurred. Abacus was hired to create a master aesthetics plan for the entire campus. The plan included changes in flooring, wall covering/paint, ceiling, lighting, and furniture. The scheme brings a warm, residential feel and less of an institutional glare. This aesthetic plan has brought about many other remodeling projects in the building as the new scheme is implemented.

In 2015, an Elevator Addition was completed in the South Wing. This alleviated many challenges that occurred when the main elevator was out-of-order. Along with the addition of the elevator, three individual resident rooms were also added, one on each floor.

Looking at the facility as a whole, Abacus reconfigured the Main Entrance Lobby from housing all the Administrative Offices to centering on the residents. The Main Lobby now includes the resident Beauty Salon, Corner Store, and Therapy Room.

One significant project was the creation of Covenant Home, a Memory Care Wing. The existing 12-unit Assisted Living facility, located on the first floor in the North Wing, was converted into 12 units of Memory Care. The Dining Room was separated and security measures were added, while decorative finishes throughout were revised according to the established aesthetics plan.  In addition, an outdoor Courtyard was enclosed and a new, much-needed Spa Room was established, allowing staff to assist residents with ease. These updates are helping the facility better serve their residents, while competing with new-construction facilities.

A Production Kitchen was a welcomed addition to the Main Level in 2019, replacing an outdated kitchen originally located on the Lower Level. With immediate access to the loading dock, and because this is the main kitchen of the two Sheboygan Falls Pine Haven campuses, this relocation now makes deliveries and shipping run much more efficiently.